… and what we want more of. 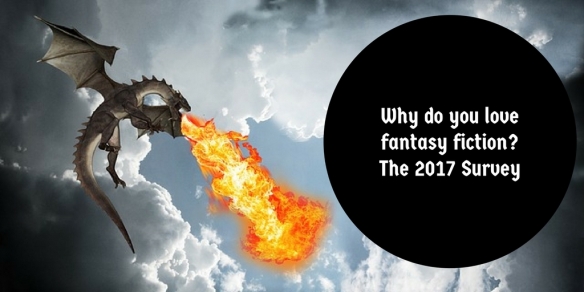 Those of us who love fantasy fiction get lost in what our imaginations conjure from the words we read. The train journey passes in but a moment. Our eyes droop as we set aside the book, too exhausted to read on into the night. Our families become widows and orphans to our reading.

In the summer of 2017, I asked members of my readers’ group 3 questions. Over 100 fantasy readers responded to these questions:

What do you love the most about fantasy fiction?

What else do you love about fantasy fiction?

What do you want to find more of in fantasy fiction?

The responses were a mix of the expected with some surprises. One surprise was the runaway success the number one reason most people give for their love of fantasy.
Here are the reasons in descending order. I could have used star ratings, but this is fantasy fiction so I’m ranking the responses on a dragon scale (excuse the accidental pun!) where 10 dragons is the highest.

Here goes in reverse order on the dragon scale:

What do you love the most about fantasy fiction?

7. Quests – Adventure against the odds

We love heroic quests against the odds done by hero or heroine. It’s about triumph over adversity during an adventure. It’s do or die against insurmountable odds. In what other genre do mortals to take on the gods themselves?

Perhaps it is because, in the realms of the unbelievable that exists in fantasy fiction, there is a need for characters to be portrayed “realistically” and deeply. This applies even if they are a centaur, elf or dragon, to help readers suspend disbelief. Fantasy readers demand exotic worlds populated by equally exotic and diverse characters. They can flourish in this genre like no other. When characters are relatable, their faults can be forgiven. Readers want to root for the character. Personally, I don’t think that last point is specific to fantasy, more genre fiction in general, and we must be talking about the protagonist(s) here.
I like this next quote: “Anyone can write a fight between wizards, but how many make the reader care about who wins?”
It illustrates the desire to root for the hero very well.
The villains of fantasy are not forgotten here. Rendering the villain in words in all their glory as intricately as the hero is every bit as essential. What is the first character that comes to mind for Star Wars? I’m betting it’s not Luke Skywalker.

“As soon as you put a dragon in a story, it’s a fantasy,” a reader once told me.
Dragons are the iconic creature of the fantasy genre. You would think that with so many stories out there featuring dragons our fantastical winged lizard friends would score more than 1.6 on the dragon scale and rank higher than 5. The story of dragons in this survey is not yet complete. There is a reason this survey had more questions. Read on dragon lovers…

Tastes vary among fantasy readers on this one. Some people want magic to be in the background, the way George R R Martin does it in his A Song Of Fire and Ice series. Others want magic to be something mysterious and unknown, the way J R R Tolkien does it with Gandalf. Some people want to know how magic works. What the rules are. This is how Brandon Sanderson portrays magic in the Mistborn series with “Allomancy” as an example. The term “Magic” could extend to superheroes and their powers and we can hardly ignore “The Force”. Almost no one needs telling where that comes from. When it comes to it, the powers or magic of the superhero is the defining dramatic concept of the superhero story itself.
However you like your magic, exploring characters with supernatural abilities making the impossible seem possible, and even fantasizing about having the same abilities yourself is all part of the charm of fantasy stories.

3. Imagination – No limits, anything can happen

Two words feature high here. “No limits.”
The only thing limiting what goes into a fantasy story is the imagination and creativity of the author and their ability to make the fantastic feel real and believable.
“Anything is possible.”
“Every restriction is lifted.”
“Make the impossible seem possible.”
“Only bound by rules the author invents.”
In fantasy, everything is bigger and grander. Authors are not limited by real world rules.
The message to fantasy authors is, go crazy, be inventive and don’t play safe.

It could be a castle at the top of a beanstalk, a world made of water, a world similar to our own but full of surprises, heaven, some other plane of existence or a city suspended by chains over the pit of hell (that one has been done).
Whatever it is, it is the setting, the world building or “worlds unlike our own”. But the physical characteristics of the world on its own is not enough. Readers want to experience the culture and politics of the races that make up fantasy worlds.
The setting is a large part of the vicarious experience the fantasy reader is looking for. Readers want to leave behind the mundane world they already know and enter fully realized imaginary worlds brought to life in writing. Humans have a desire to explore places they have never been before and a fantasy fiction world is a place that desire can be satisfied. It’s about rediscovering that childhood sense of wonder at the world about us that we lose (or feel we lose) as adults.
Readers say they want a land that is exotic, magical and fascinating. Done well, the depth and richness of made up history and traditions can be breathtaking.

1. Escapism to another reality – immersion

Top of the dragon scale and the flyaway winner is escapism into previously unexplored and unknown worlds. It might be a little difficult to separate “escapism to another reality” from “world building” but survey respondents made this distinction when they answered the survey. The way I see it is an author could build an amazing world, but without a compelling story, and heroes and heroines to follow into this world we won’t experience escapism.

Finally, the worthy mentions for the most loved things in fantasy:
Fantastical creatures, potential complexity, storyline and time travel.

Readers want more than just one thing in their fantasy fiction (of course!) and we get a fascinating and different picture to the next question:

What else do you love about fantasy fiction?

Survey respondents were free to list multiple things here so there are more dragons awarded in most categories.

OK, I get why duels and swordplay are not of the highest priority in fantasy fiction, but I’ve got a particular affection for them. And duels between wizards for that matter. Because I love them and this one from Princess Bride in particular, I’m going to share it here:

As a fan of plotting and planning stories for drama I confess I’m a little disappointed conflict-filled storylines – the plot itself – does not feature more highly in the results. Perhaps because it’s like the air we breathe. We don’t think about the plot or notice it and we take it for granted until it is not there or bad.

Some of us want humour in our fantasy. I know I like a bit of humour to make characters feel real. Most authors will tell you characters come up with their own dialogue and decisions at times, and sometimes they are funny.

8. Quests – Adventure against the odds

Quests and adventures features a little higher in “other” things people love in fantasy.

7. Imagination – No limits, anything can happen

Ranked number 3 as the most loved aspect of fantasy it’s lower in the ranking here but remember people were free to state multiple “other” reasons for loving fantasy.

6. Escapism to another reality – immersion

For the few that did not mention this as their number 1 love of fantasy a great many included it as one of their other reasons.

It’s not many peoples number 1 thing for fantasy but plenty of people mention it in their “other” list. But the story for dragons in this survey is not over yet. There is another question coming…

4. Characters (villains and heroes) and development

Fantastical creatures that could still include dragons for some respondents has a strong showing here.

I love magic in fantasy and it seems most fantasy readers do too, even if it is not their first priority.

For those that did not list this as their number 1 reason for loving fantasy the vast majority listed in “other” things. Fantasy authors, ignore great world building at your peril!

So know we know what my readers’ group loves about fantasy, the next question is…

What do you want to find more of in fantasy fiction?
This is the kind of information authors are going to love – what are fantasy readers not getting enough of?
Here is the ranking in reverse order:

Particularily in the eBook market, women buy by far the most books – 75%+ of the market. Strong female characters are a big draw in the market right now. I’m a little surprised this did not feature higher in the rankings!

Wait for it… the dragon story is still not over…

Magic is a big part of what I like to write in my stories so I’m delighted to see fantasy readers want more magic!

Dragons!
Dragons did not show strongly as the most loved or other things loved about fantasy but with 15% of respondents saying they want more dragons it ranks first in this list.
There will be dragons in future books from me in time. For now, check out the top 10 dragons from the movies:

Conclusion
Away from a few key features of fantasy fiction there is a lot of diversity in the loves and wants from readers. Authors have their work cut out keeping their audience happy!

If there is anything my readers’ group missed that you want to share please tell us the comments section below.

2 thoughts on “7 reasons why we love fantasy fiction”