Why I wrote a fantasy story

I read and loved many fantasy novels in my teens and early twenties.  My favorite authors were David Gemmell, David Eddings, Raymond E Fiest, Terry Brooks and of course, Tolkien. When I was seventeen (in 1988), I promised myself I would write a fantasy story one day.  I had an urge to create a tale that would be gripping the way my favorite movies and books were. I wanted to give the reader a sense of excitement as they read a story I created.

My writer’s journey so far

It has been long and some respects it started in 1988 when I first invented a character – a young man with tumbling black hair falling to his shoulders, sitting on a rock and holding an enchanted sword of some kind.  He had a grave look on his face, and I knew he had an immense challenge to overcome – one that his mentor never resolved.  I even gave him a name: Corylus or “Cory” as he would be called – the Latin name for the Hazel tree because he would be a tough nut to crack.  That’s all I knew.  Lacking the life experience to create the kind of story I wanted to tell, and then being busy with starting a career in IT and getting married, it remained one of those things I would do “one day.”

In 2009 I had just finished reading Robin Hobbs’ Farseer Trilogy. It was brilliant, but slow paced and exhausting for me to read because I wanted to extract the story faster than the dense narrative would allow. I yearned for something faster paced – so hard to find in the fantasy genre. The following day, scrap printer paper and pen in hand, I began writing about Prince Cory while on the train to work. Cory had a famous grandfather – a general – who was also his mentor and the war he could not end was the challenge never resolved. I wrote about Cory at his grandfather’s funeral but soon gave up because I didn’t feel the quality of the writing measured up to published works.  Sadly, I didn’t understand at the time that first drafts are always bad, and you need to take a leap of faith spending time (months or more) writing to develop your “author’s voice”.

Fast forward to October 2013 when the movie Enders Game was released. It caught my attention because Harrison Ford was in it.  I decided to read the book first and then see the movie.  I loved the story and the ending I didn’t see coming.  Orson Scott Card tells us in the forward that he had the idea for the story concept when he was eighteen but did not write it until his mid-thirties.  I was forty-three when I read this, and it struck me that the time for writing Cory’s story was long overdue.  I started to write again and didn’t stop for the two years it took me to finish a first draft of The General’s Legacy.

I move work location every once in a while (I’m a freelance IT consultant) and often work in London (UK).  Commuting there means spending over two hours a day on the train – so here is ten hours a week of writing time.  I listen to music, there are no internet distractions, and I find it a productive place to write.  On the London Underground, sitting at the station waiting for a late train or in the car while one of my boys is busy with an activity such as cricket practice at the weekend, are all places I can be found writing.  I’m working close to home right now. Fortunately, my wife understands when I spend the same amount of time at the office before and after work keeping up my writing routine.  It can be an inefficient way to write. When time is short, I might only get a hundred words down, but this is better than nothing.

Making the story exciting the way some movies are

I felt early on in writing The General’s Legacy I needed a way to pace the story and have some structure or plan to guide me. By the time I had written the prologue and first two chapters, I was daunted by the prospect of creating a whole story with all its complexity to manage without some form of plan. I felt the same way I did when I first started computer programming – you can sit down and just write a small computer program by the seat of your pants, but how do you build a large and complex IT system? At college, I learned how to design software. I was convinced I needed to learn how to design a story. It only took minutes of searching online for me to find “Story Engineering” by Larry Brooks.  This book taught me how screenwriters and many novelists plan their stories, define their characters and more. This approach to planning a story forces me to come up with plot twists, conflicts and dramatic moments that I might not otherwise have thought of. Knowing that these “plot points” are coming, and what the goal of each of the four story phases are, I have plenty of page time to spin the story in their direction.

The “plotter” or “panster” question

For me, a bit of “seat of the pants writing” is an essential part of discovering character and story, but I need a plan before I go too far. Sometimes the story goes off plan for the better – so the plan is updated. I believe the method and the plan must serve the story and not the other way around… but, as Larry would say, structure is story (a ton of authors might disagree). However much I might stretch the structure rules, all the essential points are there by the end.

Inspiration — where it comes from

Mostly, what is going on in the world around us right now and in recent history.  I’ve avoided creating a fantasy story that draws too heavily on medieval history for storylines and setting. The General’s Legacy is set in a fictional world partly inspired by 18th and 19th century Europe – there is even orchestral music. I’ve used differing fictional religious beliefs, divisions within religions and characters with no religious beliefs for inspiration – without preaching or disrespecting any particular point of view. This also applies to future stories in the planning process.

For some elements of the story, I‘ve used my own experiences. Life throws many of us a curve ball at times that we are not equipped to catch. These can be stressful times – sometimes too stressful for us to cope. I wanted to make something positive out of such hard times. Anxiety and stress come into play in The General’s Legacy, mainly in connection with the use of magic in the story and one character in particular. All great heroes need an inner weakness to triumph over as they try to overcome the antagonists in a story.

The General’s Legacy will be published in two parts – “Inheritance” followed a few months later by “Whiteland King.” The editing process has been consuming much of my writing time since October 2015, but I am planning and “world building” for a series of four more stories to follow on from The General’s Legacy. There are characters, little snippets of information and bits of history dropped into The General’s Legacy that set some things up for the future stories. 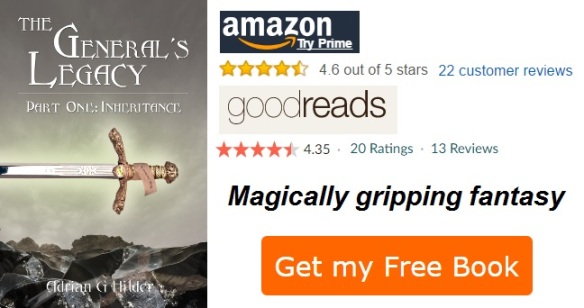